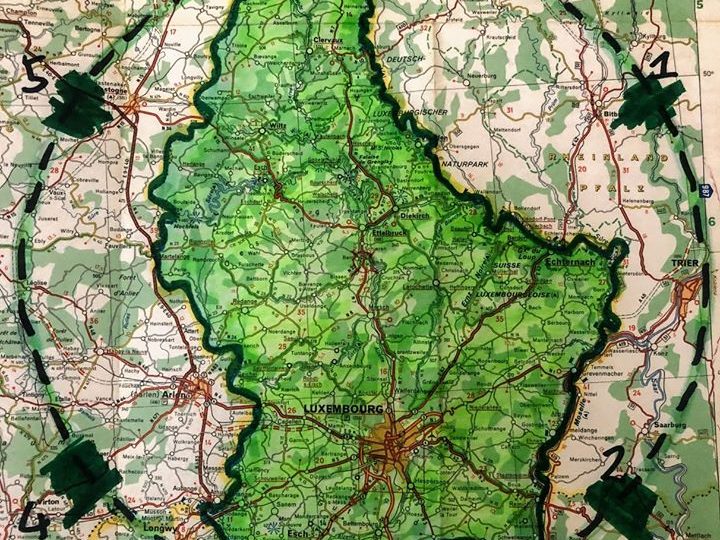 “I want to walk around Luxembourg”, I said …why would you even consider Luxembourg? one would respond, what is there to see in Luxembourg? Grey buildings and banks? Well, that is why I would walk around it, see!

I have drawn a circle around Luxembourg, merely touching its borders. This circle is obviously 360 degrees and by pure coincidence 360 km long!

UPDATE 2022: Due to Covid this plan was postponed and my stamina is not as good as it was, so the 60km thing is passé. I still consider walking it, but this time is parts of 30 to 45 km. Secondly I want to enjoy this circle more than ever before, this is my (post?) corona circle.

The drawing of a circle on a map is quite a challenge, It is done on paper maps and later on on Google Earth which has some rudimentary tools to draw things. Once a circle is drawn I make a quick tour to see where unsurpassable obstacles such as airports, highways and rivers would distort the final circle too much. This operation would take minutes at first but hours once a circle passes the first tests and checks. I made dozens of circles before I had the right one.

Once the circle is established I start drawing the exact path I would walk. Because I want to stay as close as possible to the circle this involves some extended research on several platforms. Because of inaccuracies in maps I have to compare open-street maps to google maps and apple maps (sat) and topological maps,…

I was super satisfied I finally had a circle that worked, I drew the whole path, days of work, to zoom out and notice the hole f*ck*ng thing crosses the Luxembourg border! Horror! While checking how I could repair the damage I noticed that the place I crossed the border was actually Schengen, wow what a coincidence, my illegal border crossing was in the exact place that symbolises the freedom to cross borders in the Eurozone (for us Europeans :-/) This is perfect.

While drawing the circle I noticed it passes Steffesheim in the North in Belgium just a few km of Germany. I spend a whole summer there as a 17.9 year old as a volunteer on a building site of a village farm destined to welcome alcoholics from the Marrolles area of Brussels, what a coincidence. The purpose of the place is no more, it is now a ferienwohnung (this is the German speaking part of Belgium)

I planned the tour on the 21st of March 2020 in the week of the Equinox with equal days and night because 60km times 5km/h is 12 hours and numbers are a part of this adventure. Two weeks before departure I canceled the trip because of the Corona lockdowns, walking in four countries would have been impossible.

Hope to pick up this plan later on.