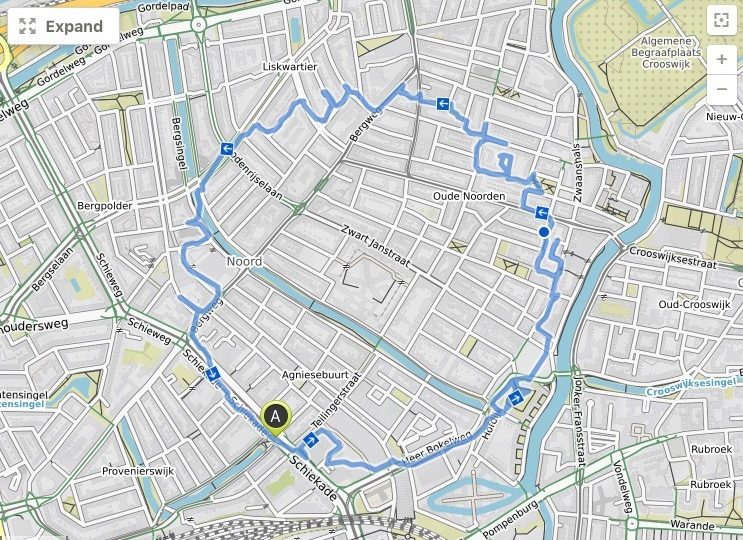 During the Corona pandemic Lock-down I went for a walk. I walked around, I walked a round.

Two years ago I had the plan to walk in Circles, “like a goat attached to a rope to a pole”. To, as they say in the movies; “draw up a perimeter!”. The shape of the final circle would depend on the obstacles encountered.

In times of Corona Lock-down it all made total sense, in France there was a Périmètre of 1 km . This online tool even made the circle walk for you. There wasn’t such a thing in the Netherlands but the circles expressed the language of confinement.

One of the main purposes to walk a line is that the ‘line is the curator’ of what one sees, there is no pre-selection of high-lights or attraction. Because of this strict line I would go to place I would otherwise have skipped. (Remember I walked the 51st longitude though Germany in 2018)

‘The line is the curator’

The CircleWalk was designed as a method of discovery of towns and cities. The size of the perimeter could be depending on the population or the size of the town. I made dozens of experiments to analyse what would be the circling method of urban discovery.

In Rotterdam I walked the perimeter of a circle with a surface of 1 square kilometer ( 1km²circle) thus with a ø of 1.12837916709551 kilometer. This size would be quite perfectly fitted to the size of Rotterdams neighbourhoods.

I documented each circle with hundreds of pictures, not only of the corona measures but also of common things like urban elements and architecture. From every circle I choose about 40 photos that made the most sense at the time, I kept the 400 others to make a post-covidial re-evaluation that would most certainly contain a different set of pictures.

I made a report of most of the circles on Facebook and got great response and even people doing their own circles.